What if You Took Vacation Bible School into Your Community?

One of my deepest desires is to see the lost come to know Christ. In 2005, our church took our Vacation Bible School into our community. In the two previous years, we spent thousands of dollars on curriculum,

resources, and man hours hosting a VBS in our church with minimal results.

After my first two years at my new church, I became very burdened. It seemed like we were hosting a camp for Christian kids instead of fulfilling our purpose of reaching the lost through VBS.

The fact that there were thousands of children and their families in our community that had not heard the Good News of Christ deeply burdened my heart.

I sought the Lord in prayer and simply said, “Lord, if it is Your will, please open doors for us to go off campus into the public schools next summer.” Our church had developed really good relationships with several schools in our community.

When I brought the idea to our staff meeting, I found myself being drilled for an hour with questions like, “What will families think if we do this? What about the kids in our church?” You can imagine all of the questions.

I told them that I had prayed fervently about this and the indication that it was God’s will would be if the schools would allow us to use their facilities for five days in the summer.

We submitted our proposal to the Fort Worth, Texas ISD and within two weeks, we were approved. I was extremely excited that this door was opened! Some folks in our church were not.

The doors opened in three schools to do our off-campus VBS, which we called Kid Power Camp™. They allowed us to use the auditorium and three classrooms.

The schools let us know that we could not decorate the classrooms. If we decorated in any way, we had to remove what we put up. So, we chose not to put anything up at all.

It’s funny, I didn’t hear any complaints from our volunteers. It was nice for them not to have to spend a whole week making decorations and covering walls in classrooms.

Years before, we were all exhausted the first day of VBS because of all the time we had spent in preparation the week before.

Another benefit was the amount of money our church saved on resources and decorations. With the money saved, we were able to give every child a Bible and new Christian materials for those who trusted Christ.

We advertised in the schools, and we had about the same number of kids that first year as we did at our church.

The major difference was that we more than tripled the number of children and their families who came to know Christ the first year we went off campus.

Two years later, we turned our attention to local apartment complexes and had even greater results. This time, it made a huge difference because we went to where they lived. We saw more decisions, we also saw 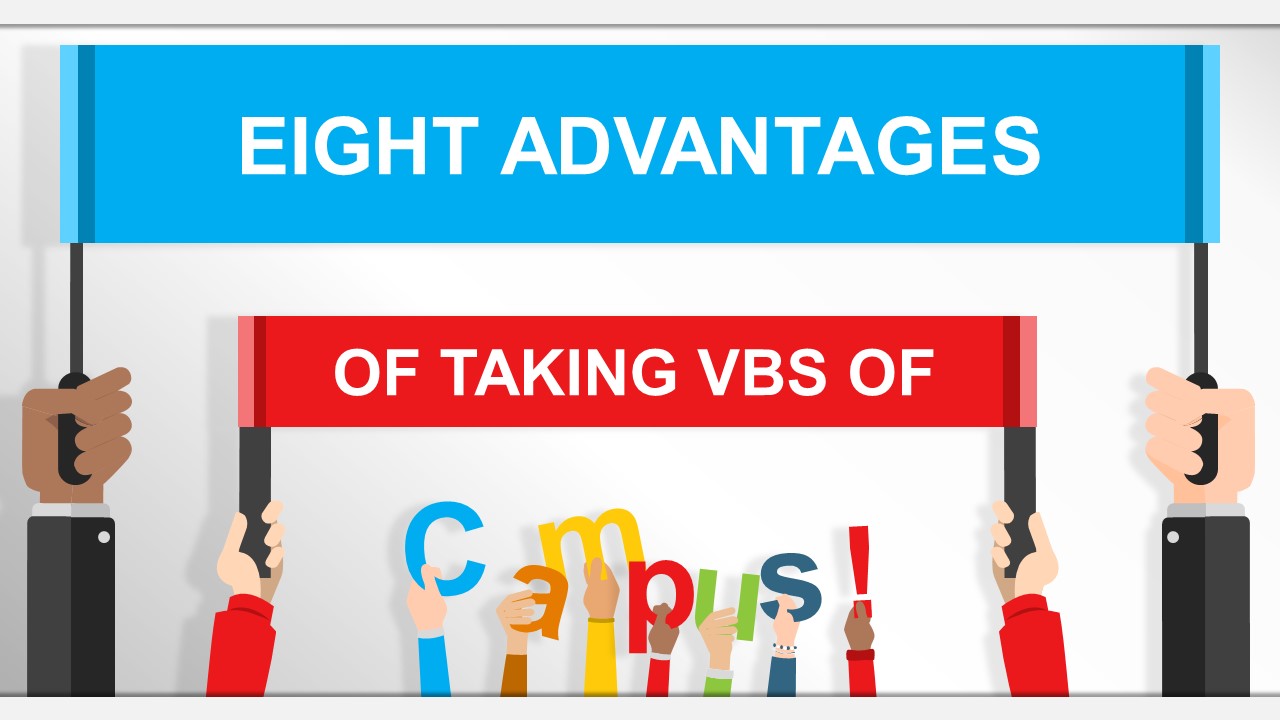 more people coming into our church after VBS.

Taking VBS off campus from your church gives your church family a Great Commission mindset. Everyone was really excited as we kicked off the week in worship and prayer. Then, we went out as a body and impacted thousands of lives over the next ten years.

I want to invite you to a brief webinar, “Eight Advantages of Taking VBS off Campus!.” I will show you steps you can take as a church to mobilize your members and send them into your community. You can cut your costs by more than half and reach more people and have a lasting impact on your community. Thursday, February 8, at 1:00 p.m. central. Sign up today!